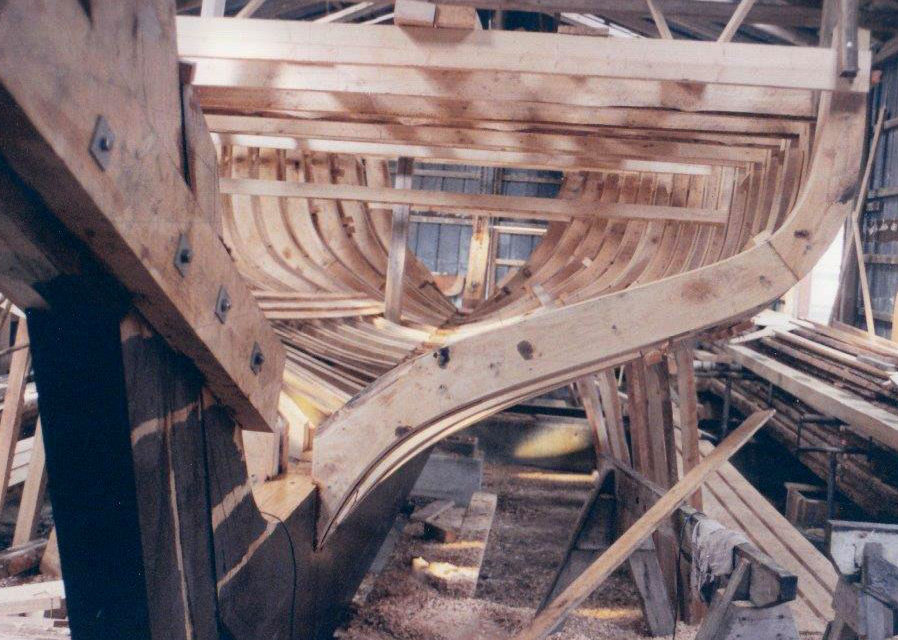 When I first met Henry, I wondered why someone would build such a boat and wanted to sell it before it was finished. What motivated Henry to Build EMMA in the first place?

In younger years Henry brought his carpentry skills to a boatyard in Nykøbing on the Island of Mors in the Limfjord in northern Jylland (Danmark). He was a member of the crew that built the last wooden ferry for crossing the Sallingsund before many years later a bridge made ferries obsolete. Back then there was little motorized traffic and cars were not for everyone, so if you wanted to see your girl or boyfriend on the main land you had to ride your bike to the ferry or row a boat across. 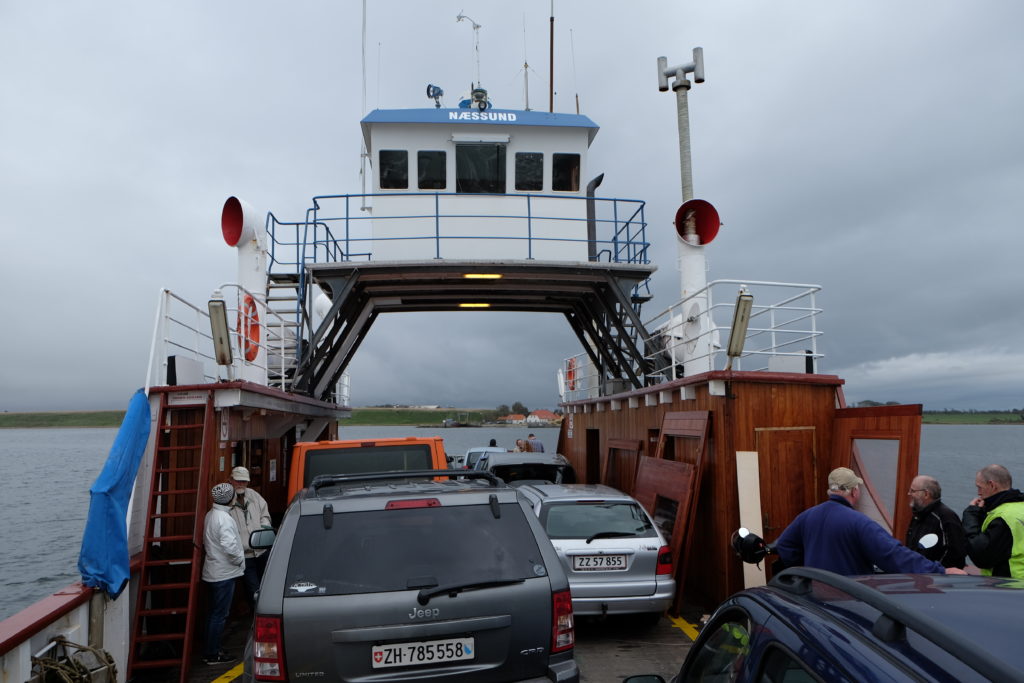 Later Henry got involved in the restauration of a wooden boat for a private owner. However, things did not turn out as expected because in the middle of the project the owner chose to move it to Poland.

Henry found himself employed as a carpenter / forest worker / handyman on Højris castle, an estate on the south coast of Mors with an old growth forest around it.

«Why build models or restore old boats, when you can build a new one from scratch?» He must have thought when seeing all the timber on hand in the woods around the estate. A «work-for-timber deal» was struck with the owner and larch trees for masts and planking could be cut and laid up for years of seasoning. Not all the naturally grown knees and frames could be found at Højris’ though, so some of the oak is from the main land across the Limfjord. There is hardly a more sustainable boat building material as wood that one can practically harvest in one’s back yard. 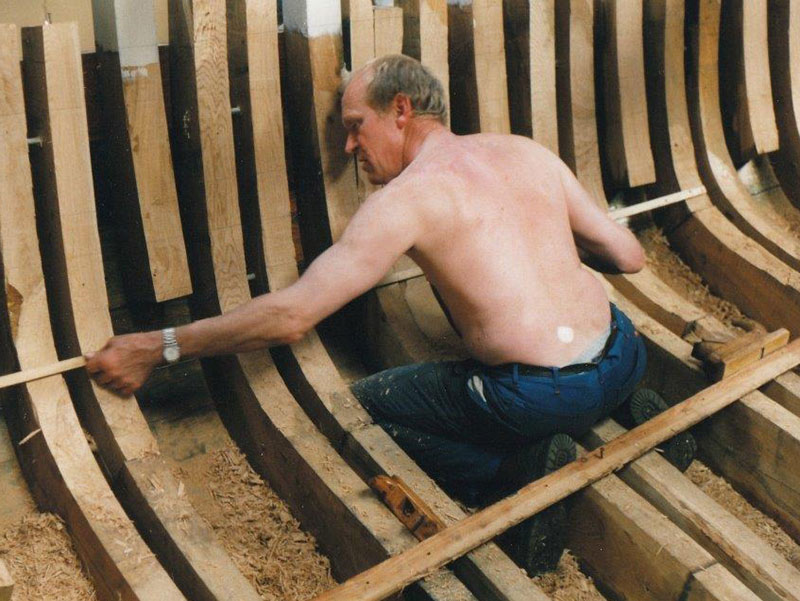 Henry at work on the interior structure

Even with the moderate size of EMMA a boat building project can be quite overwhelming, especially if you are doing it mostly alone and in your free time. At some point along the way Henry must have realized that it was not so much the dream of sailing, but the dream of building such a perfectly balanced craft that drove him. But was there anybody out there that would appreciate his efforts? «Yes, finish the interior and bring the boat to Copenhagen, I want to live on it» said one of the prospective buyers. No need for a rig for this compatriot…

«We could use it to promote our rum distilled right here in the harbor of Sillerslev» said another, but the local distillery had moved to a new location before Emma had any masts.

Into the picture enters this guy from Switzerland who had just spent a summer with his wife cruising the Stockholm archipelago (skärgård) on their sleek vintage racer-cruiser that they brought up from Switzerland. 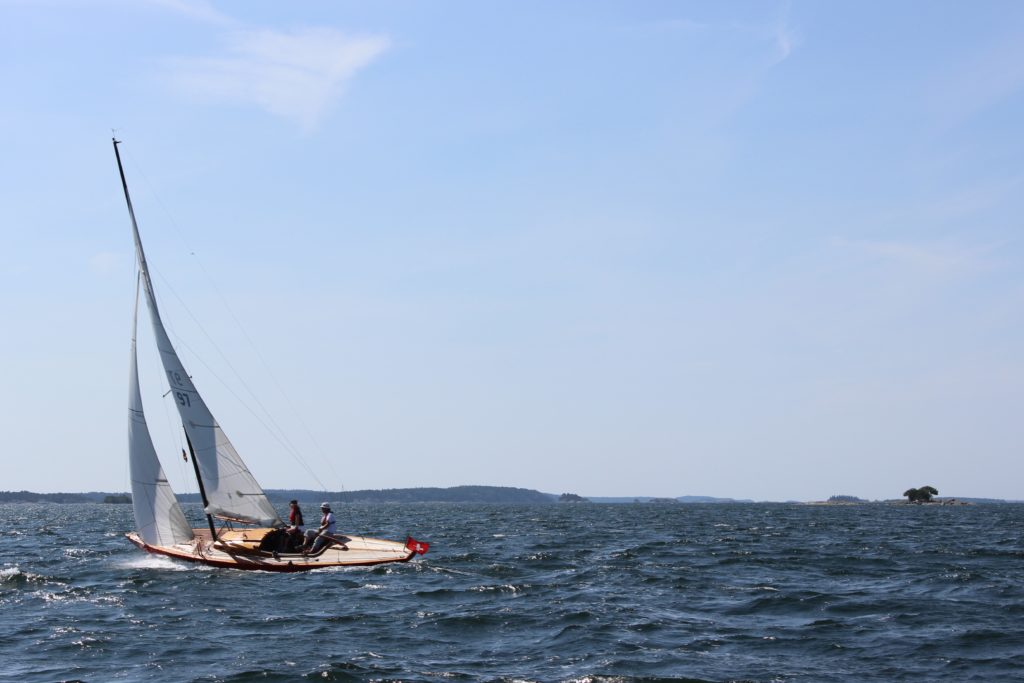 Stacy and Walter cruising the Stockholm skärgård on their Lacustre no. 97 «Porzana»

Wanting to repeat this fantastic experience without the hassle of negotiating the German freeway madness with a heavy trailer in the back, Walter was googling «wooden boat scandinavia» on a dark and dank November night. Up popped EMMA – not really ready for the skärgård nor for cruising right away but definitely what could be the perfect boat for sailing the seven seas around the world. 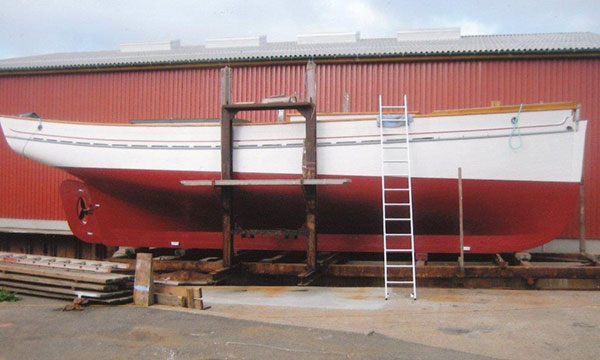 A deal was made that motivated Henry to continue working on EMMA as the masts needed to be built and the interior needed to be started. In parallel Walter had some ideas of his own as far as rigging, sails and anchoring were concerned. That winter Henry got the spar timbers out from underneath the stacks in his shed and started with shaping bowsprit and foremast. A mast cart also needed to be built since the masts weigh probably over 300 kilograms and would need to be transported down to the harbor for completion. 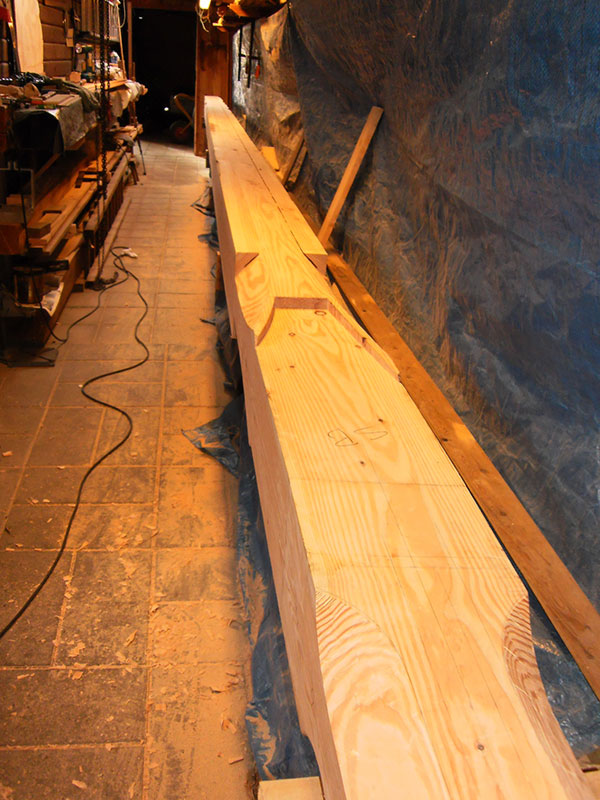 The bowsprit is taking shape in Henry’s shed

Next summer Walter arrived with a car full of stays, shrouds, mast hoops, belaying pins and two boxes full of lacquered blocks of all shapes and sizes. The length of the shrouds was measured and after three weeks of splicing a bunch of 12mm 1×19 stainless steel wire and servicing the splices with strips of sailcloth followed by layers of tarred twine against water intrusion the completed standing rigging was coiled up and put away for a year. 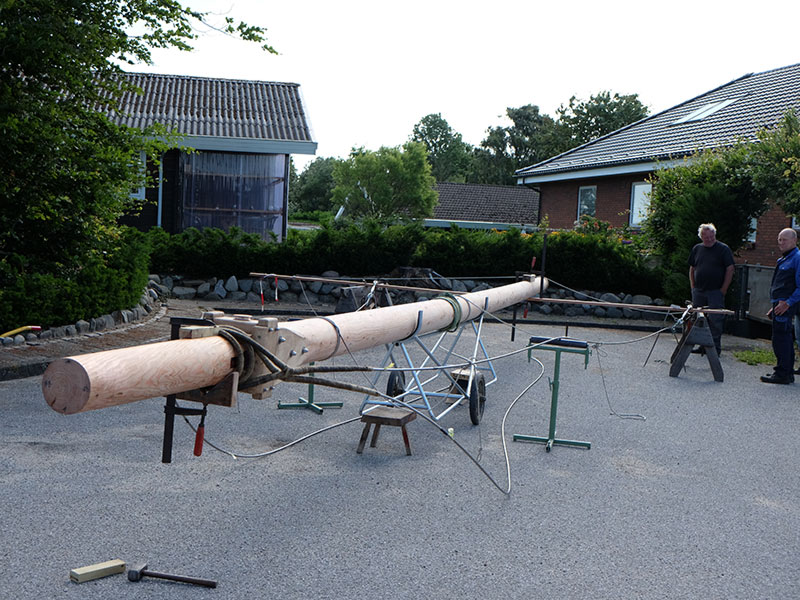 Measuring out the shroud length of the fore mast – the mast cart sure came in handy!

In the mean time spar making continued. Henry got to work on the main mast, the spreader bar and the top mast. With Flemming Worm from nearby Nykøbing, a friend and talented metal worker, a lot of custom-made hardware was specified and manufactured. 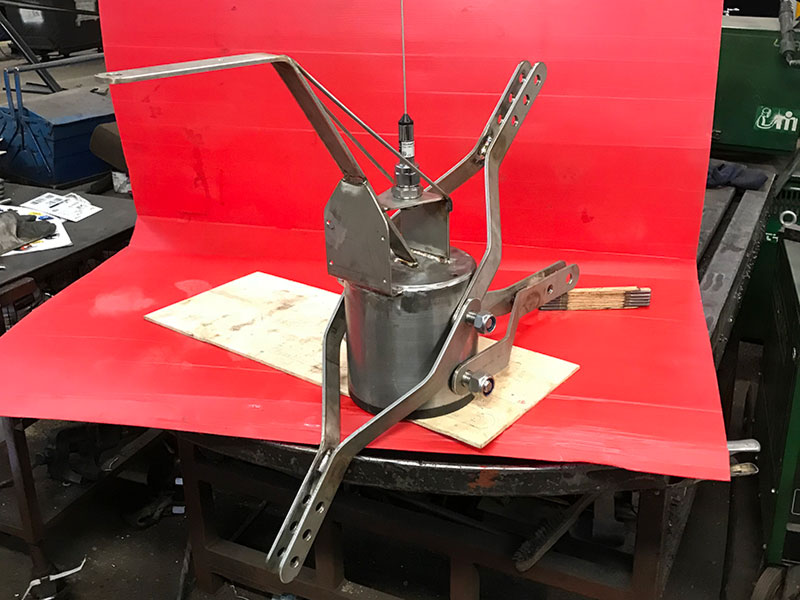 The top of the forward mast – built to last…

Summer came again and Henry managed to rent a big hall down at the harbor from a local fisherman for 120 cans of beer. The hall was long enough for the masts. They were lacquered, the hardware was galvanized and mounted and the stays and shrouds went on.

Henry’s brother Knut who normally drives the Feggesund ferry on the northern tip of Mors arrived one morning early with his tractor backhoe. It was strong and stable enough to lift the bowsprit which had to be convinced to fit into the snug cut out Henry had prepared in the forward face of the samson post. As always Henry’s precision woodworking skills are impressive.

The day came when the big truck-crane arrived on scene. The main mast – spreader and topmast mounted – was rolled into position with the help to the sturdy purpose-built mast cart. With his remote control the crane driver picked it up, guided it over the hole in the deck and lowered it carefully down into the mast base inside the boat on top of two good luck coins. It fit like a dream, as did the collar on deck, that is made up from many precisely shaped wedges, all slightly different in shape to accommodate the angle between the raked mast and deck. Formidable precision work once again! And the shrouds fit too! Next was the fore mast which went in much the same way. Except the shrouds were a wee bit too short. The turnbuckles screwed out to their full length would not bridge the gap. Hm… 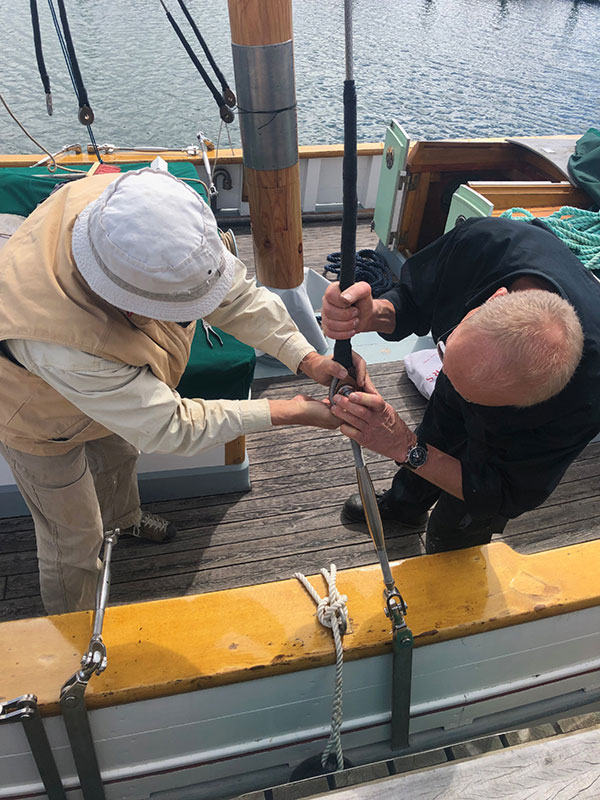 Now if you don’t know exactly how long your shrouds must be because it’s the first set of shrouds and you can’t measure them directly, you have to take some measurements on deck and on the mast and use trigonometry to calculate their length. In our case – as we realized later – the fore mast was not entirely straight but was curving somewhat to the bow. This meant that the distance from the mast top to the chainplates did not correspond to the calculated length. Anyways splicing is a lot of work. If in doubt it is much better to err on the short side than ending up with a cable that is too long. It is much easier to add a second toggle to bridge the gap than to start from scratch which is what you have to do if a shroud is too long. Cutting off a splice and making a new one will shorten the length considerably so your shortened shroud will now be way too short. So, Henry made us some custom toggles for the fore mast. Double toggles top and bottom of the turnbuckles are a good precaution in a low-tension rig where the alignment shifts slightly all the time.

This is where we stand with Henry’s story. If you happen to cruise through Sillerslev Haven I’m sure he will have a lot more to tell. 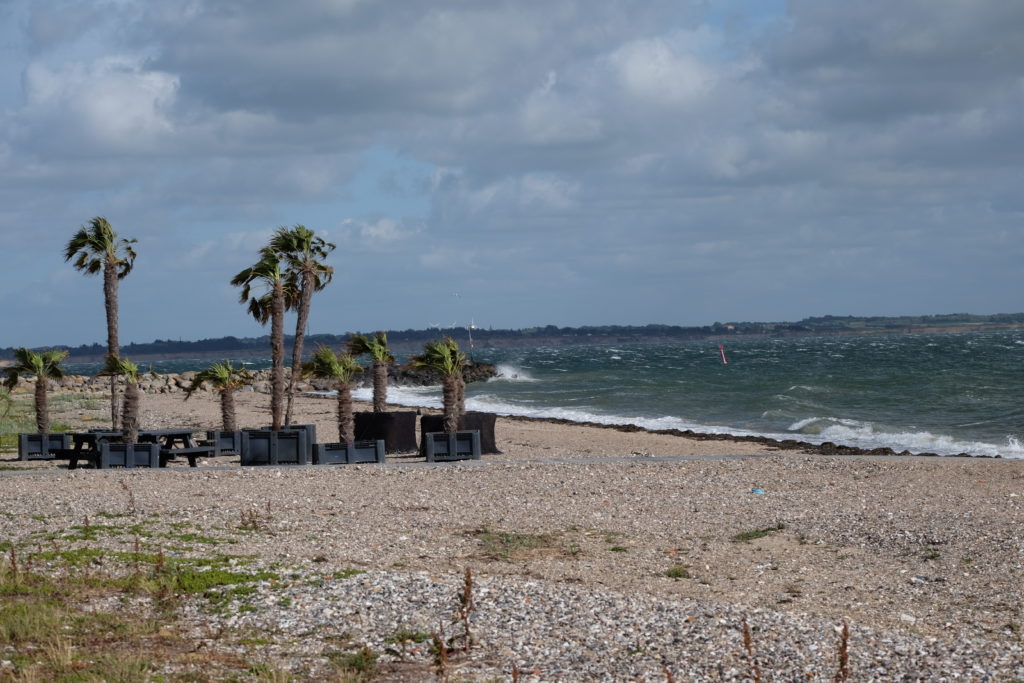 Sillerslev Haven with it’s palm beach awaits you – be sure to bring our greetings to Henry! 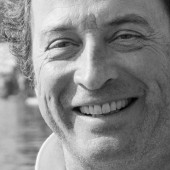 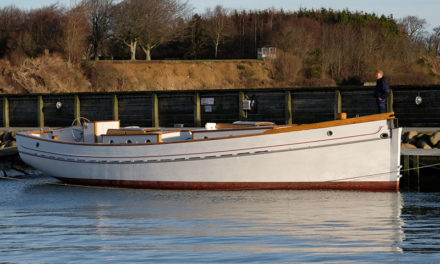 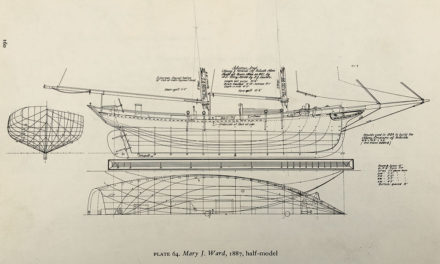