Delivery cruise from Limfjord to Aero 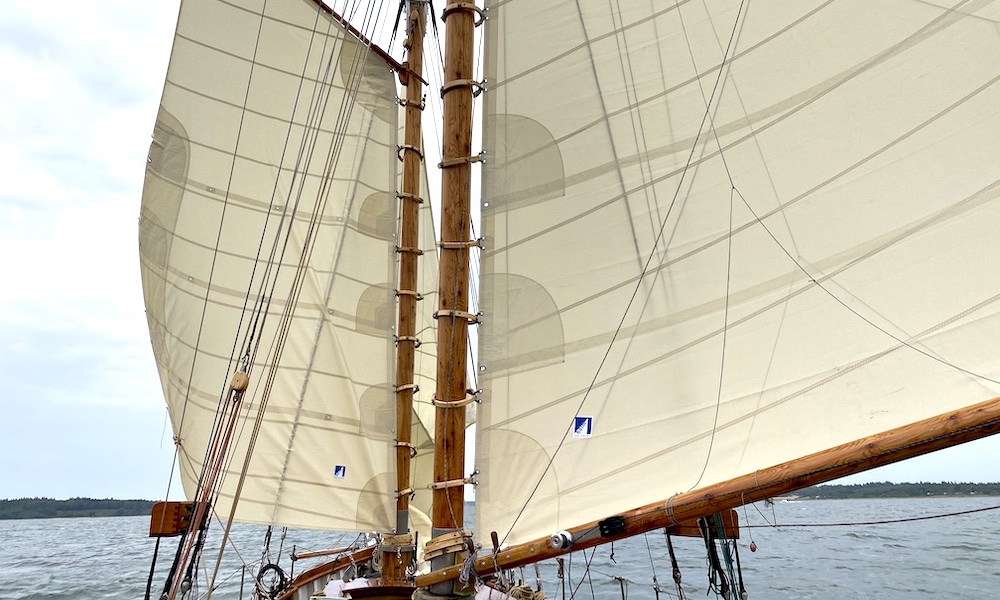 In mid-July 2022 Emma was put back in the water after her cabin construction, and brought back to Sillerslev, her home harbor. This step was quite hectic as the last construction details were being completed the night before the crane crew showed up. Everyone was very relieved to see that she had not “opened up” while being on the hard for so many months.

She was filled with all sorts of material and tools, and the first task that we had was to clear her up and organise a bit so that we could live on her and sail her. There was also a lot of floor-scrubbing to be done, and cleaning and storage equipment to buy. Thankfully, we had our car close by and knew where to search on the island of Mors.

After a couple of days in the harbor, where the locals stopped by to see Emma one last time and to check out her interior, we set off with towards Nykobing. Henry accompanied us until we passed the bridge, and then the Sillerslev harbormaster came up to take him back home. From now on, it was just Stacy and Walter on their new schooner. A boat this size takes a lot of strength to manouvre as well as for sail-hoisting and trimming and usually one sees rather large crews doing the work. We were determined to do it ourselves, and had a rather steep learning curve ahead of us. 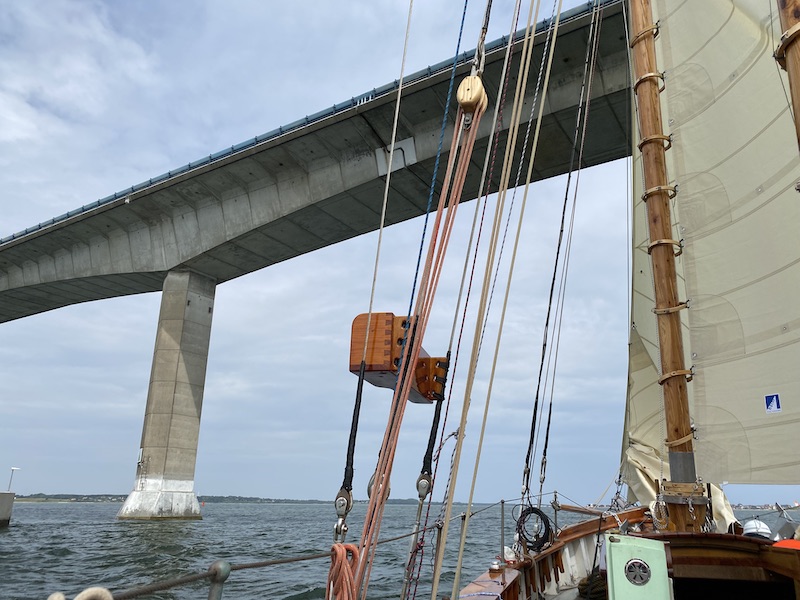 Not all bridges will be this easy to pass – here at Salingsund, Limfjord. From here we headed on to the island of Fur and around her west and north coasts … 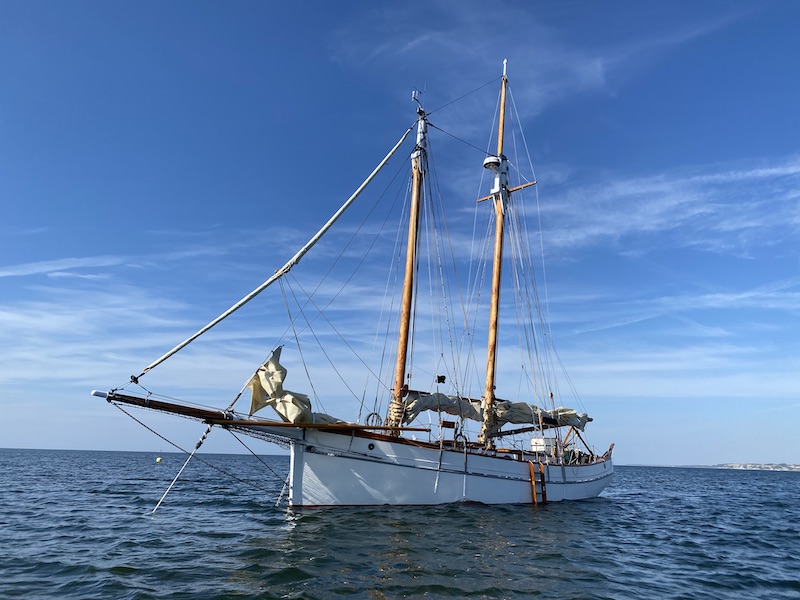 At anchor on the tiny island of Livo. Its quite hot and we’ll stay here two nights to enjoy the quiet and the nature

Wine and canned fishy-stuff on crackers with a lovely view 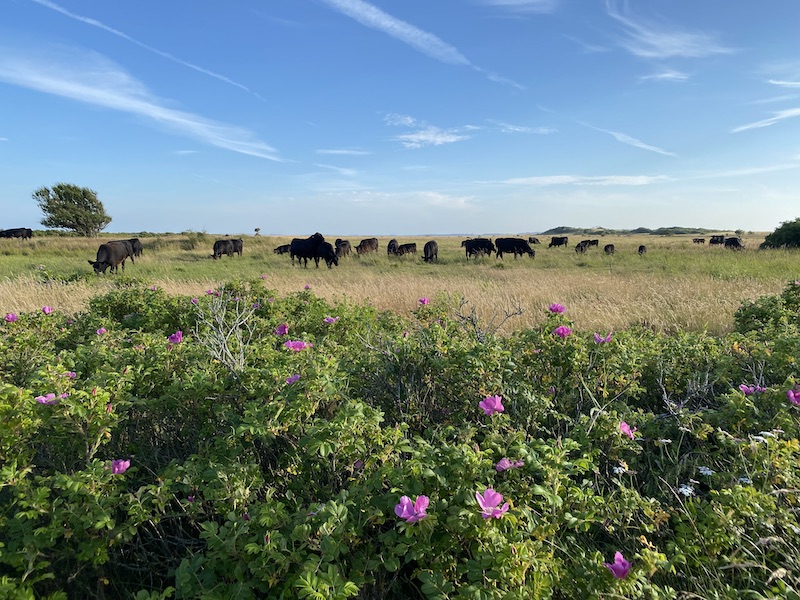 We walked around the island the next day; it was very hot but also very beautiful 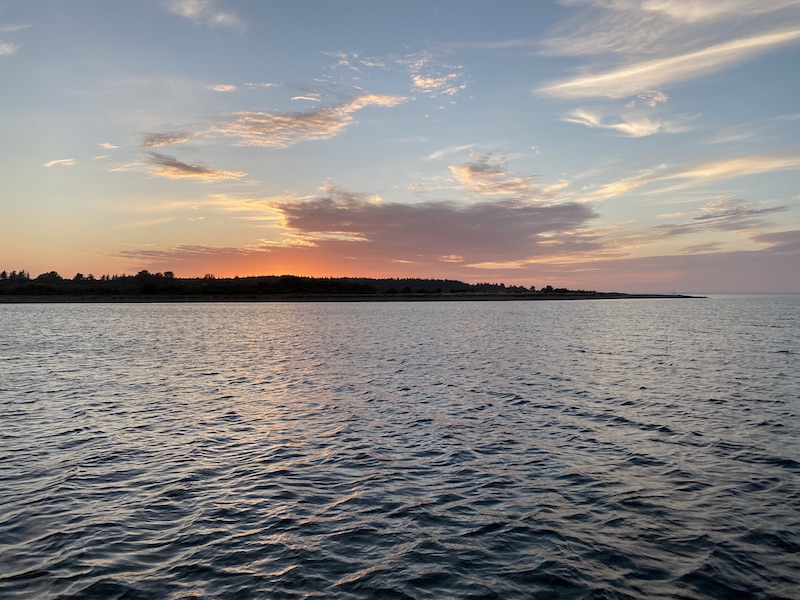 Sunset from the boat

From here, we continued on to the waterway that would take us to Aalborg and then out to the Kattegat Sea. We had to motor most of the stretch (it was like being on a wide river) but also had to watch the markings extremely carefully in order to stay within the canal. Somehow I got distracted and ran the boat aground — thankfully on a sandy bottom! In any case, a kind fisherman pulled us off and we got underway again.

Another challenge here was the bridges. Some open on a schedule, others just close when their trains run through, yet others only open when you signal them … and one had a breakdown so we ended up spending an additional night in Aalborg while the missing part was found and mounted. 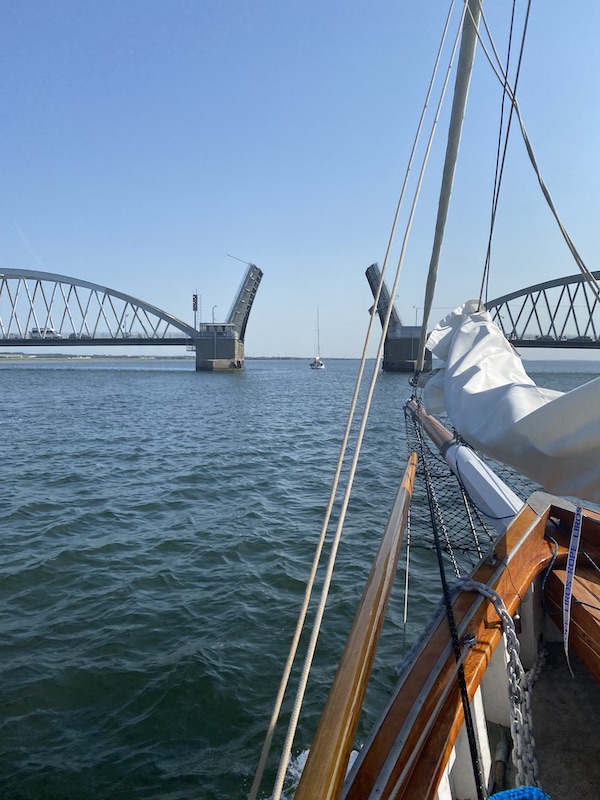 One of the many bridges in the Aalborg area

After (mostly) motoring to the end of the waterway, we reached Hals, and found a spot on the harbor wall. Popular harbors here are filled over capacity this time of the year, so we never knew if we would find a spot. Additionally, we are simply too wide to fit into a normal spot. Nor can we go “bow-to”, as we have a massive bowsprit. Therefore, very thankful to be able to moor “side-on”. As we gained practice, this manouvre got smoother and smoother (while remaining as strenuous as ever …). 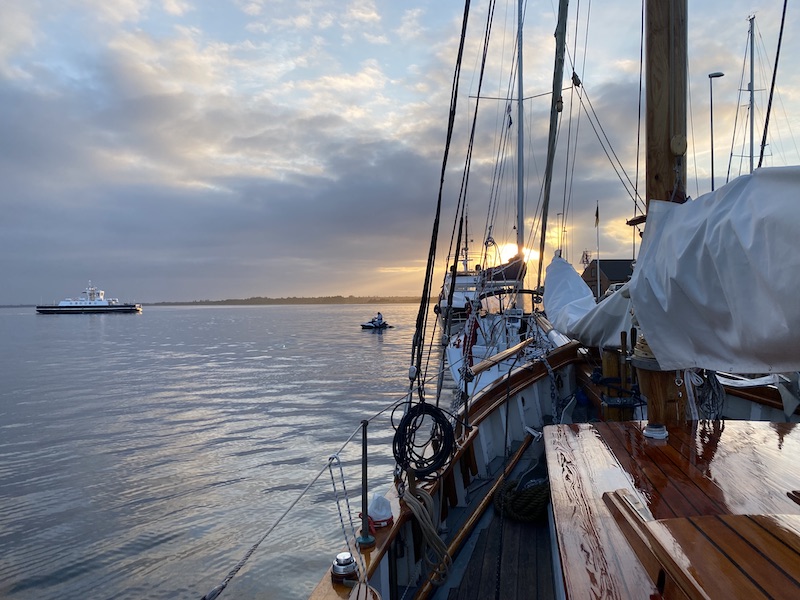 The evening atmosphere in Hals would have been so peaceful if our neighbor didn’t have to zip around on her ridiculously loud jet-ski toy… oh well, to each her own!

Next stop: Anholt. This island lies between Denmark and Sweden in the rather choppy Kattegat sea. It was a very bouncy ride. 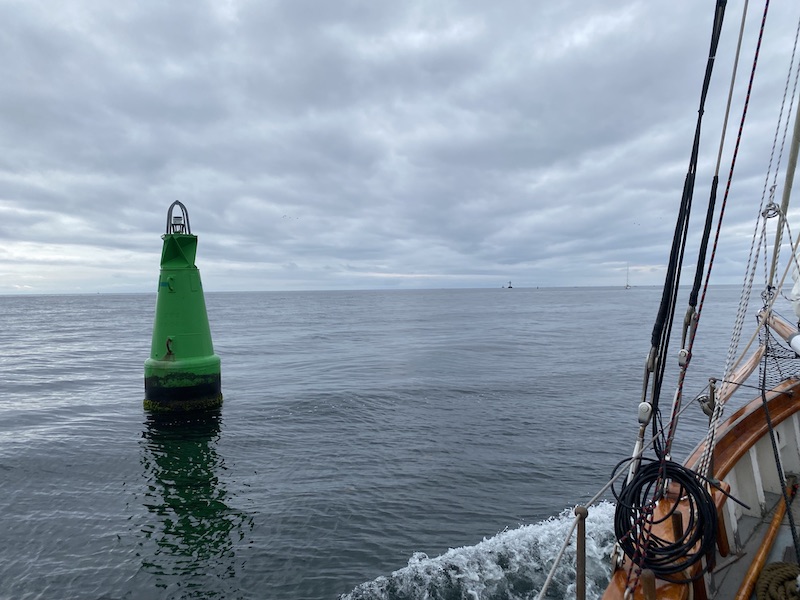 Prehaps the last marker for a loooong time? At some point, no land was visible …

With her wide belly and 22 tons, Emma handles the waves quite well. She’s a fisher schooner, so her deck is quite low to the water. In other words: we get wet. But as we sailors like to say, it’s a water sport. 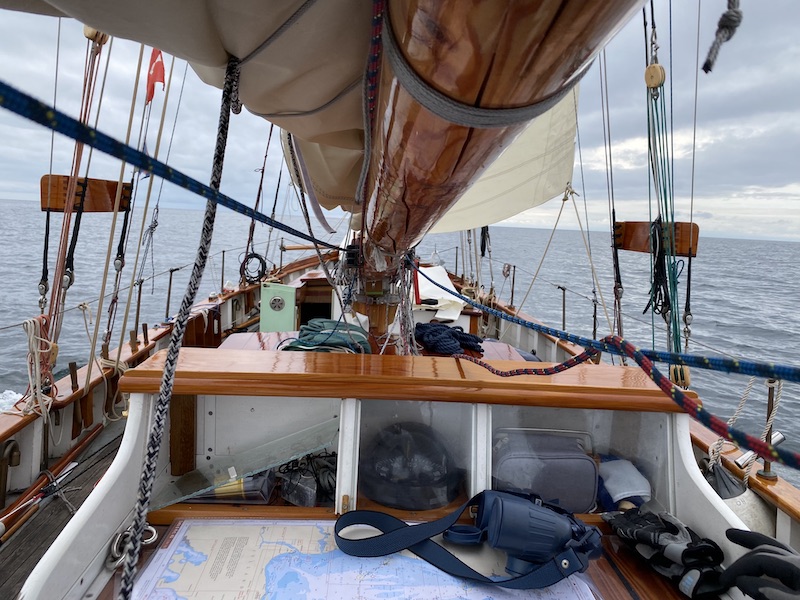 Having to motor in low winds. At this point, the seas are calm …

Upon arriving at Anholt, we were greeted with a massively overfilled harbor. The kind harbormaster directed us to a side pier, where we stayed for two nights. Unfortunately, the wind and seas piped up and this location had a horrible swell. We later moved to more protected spot (hanging off the side of an oversized motorboat) and were able to sleep again.

We discovered some lovely walking trails in Anholt as well as the crusty, fun gin bar. Anholt is a popular spot and proof that you’ve completed a long stretch, i.e. filled with charter crews and all sorts of bars and eateries catering to these. It’s also an eldorado for kite-surfers and -foilers and it was fun to watch what the “pros” were capable of doing. But all in all, Anholt was a bit of a “circus” and we were happy to leave. 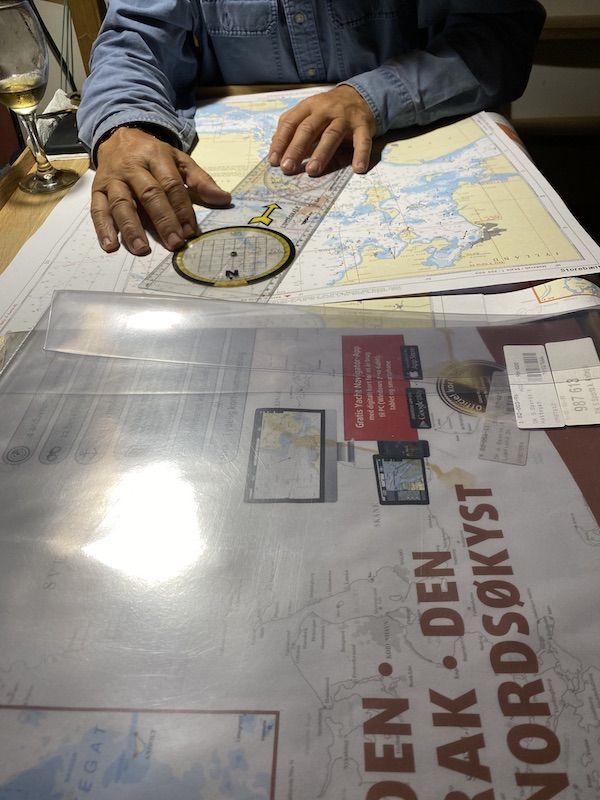 Old-school navigation – we always had a Plan A and a Plan B and sometimes a Plan C. 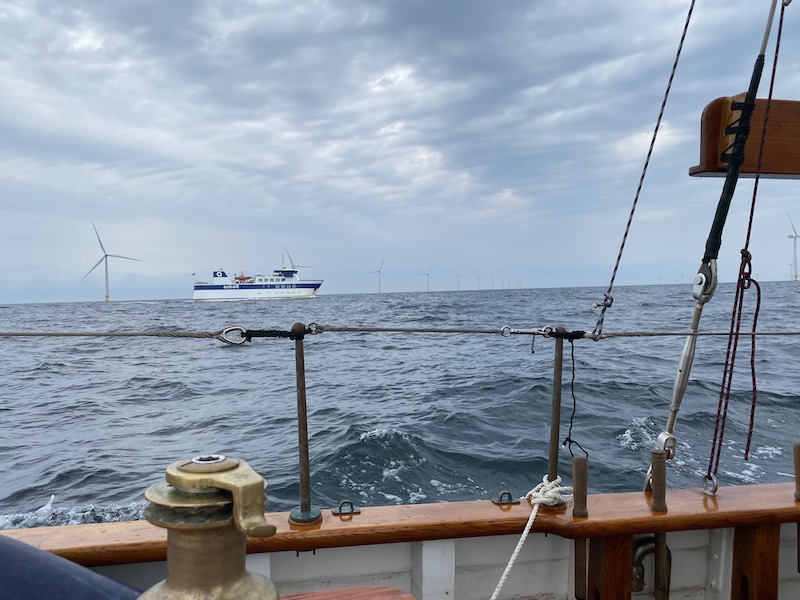 Leaving Anholt, we kept our distance from the ginormous wind farms out at sea. The props “dwarfed” the ferry, which in turn “dwarfed” us.

We continued (through choppy seas) back to the mainland and to Grenaa, where yet increasingly rough weather kept us in the harbor for one more day. Walter used this time to install parts of the electrical system, thus enabling us to use our toilet (yay!!!) as well as our electronic charts (yay! yay!). 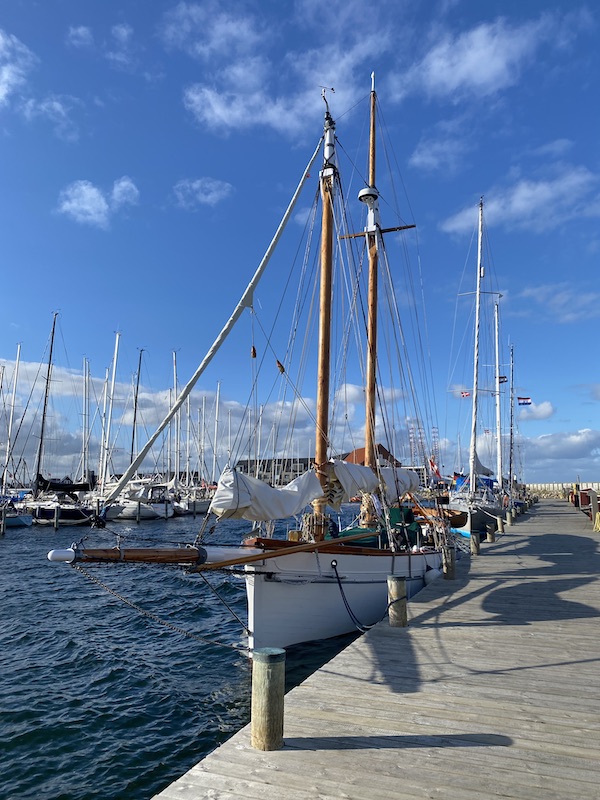 In Grenaa and still on the “learning curve” — This spot would prove difficult to get out of. 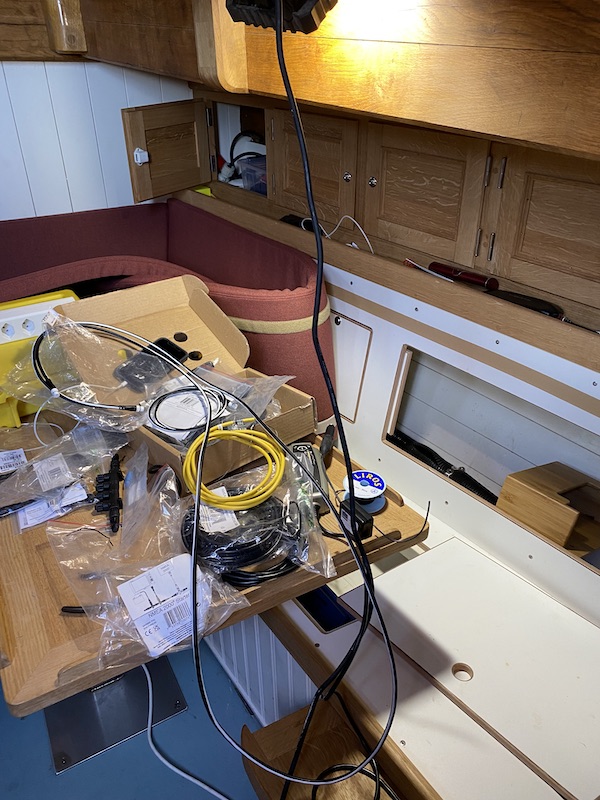 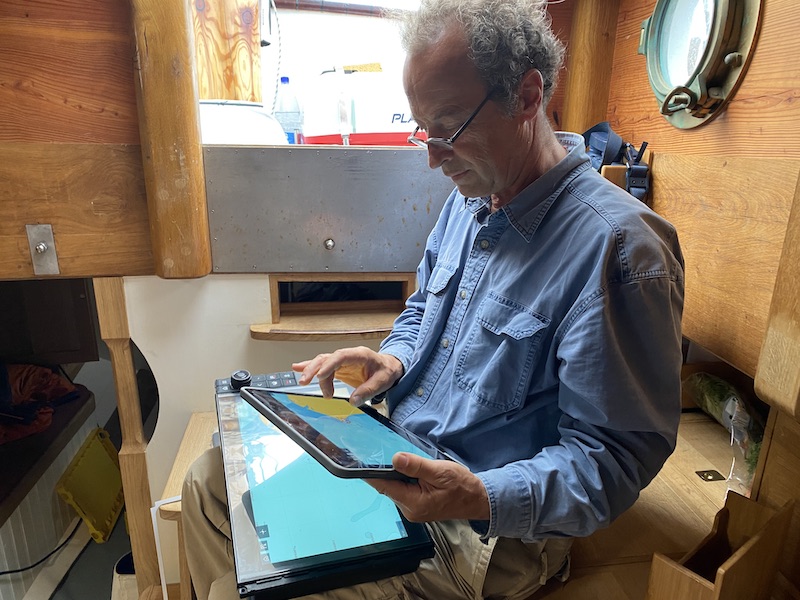 It works! Raymarine nav unit with charts, etc etc. The large screen will be mounted in the nav station and from there it relays to an ipad that we have up on deck.

From Grenaa, we headed to Samso, which was definitely a highlight. We delicately navigated through the entrance to Logstor sound and dropped anchor there. This is a magical place that was once a hideaway for viking fleets (thanks to its difficult approach). We took an extra day to walk and discover this lovely place and definitely will return. 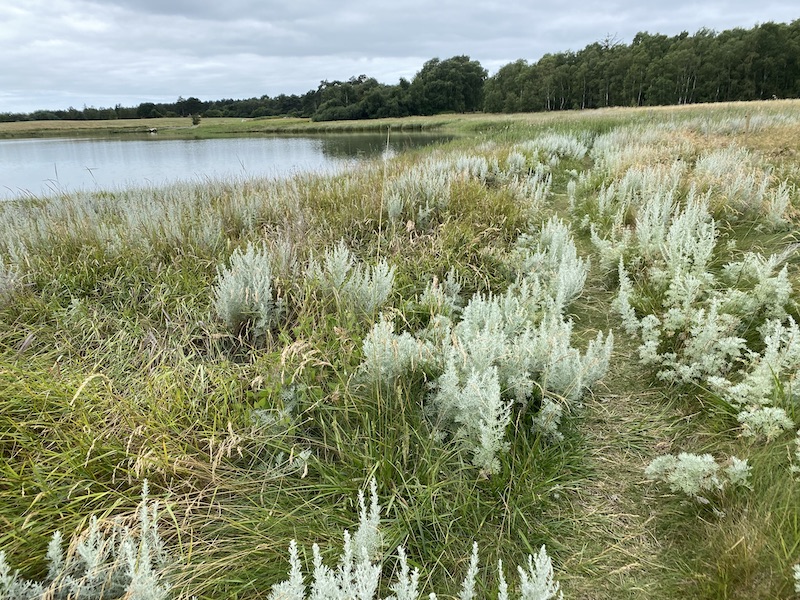 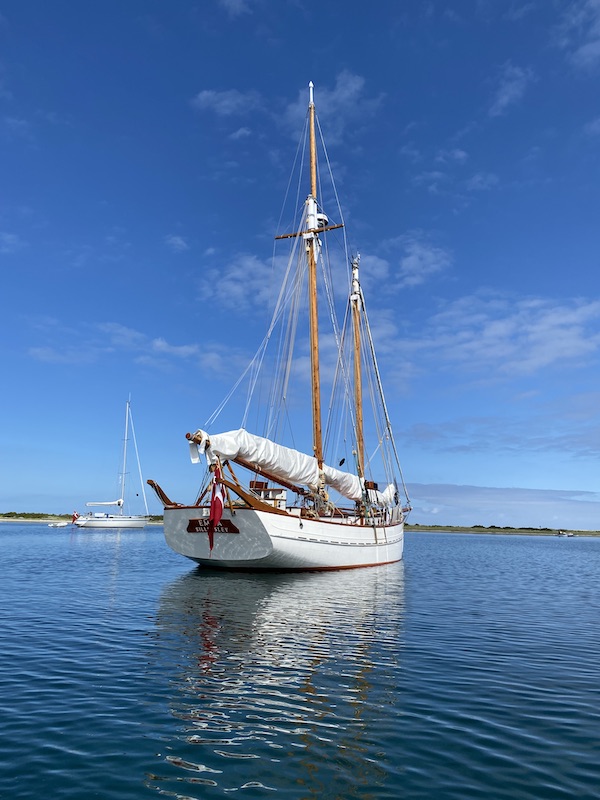 At anchor in Langor bay. 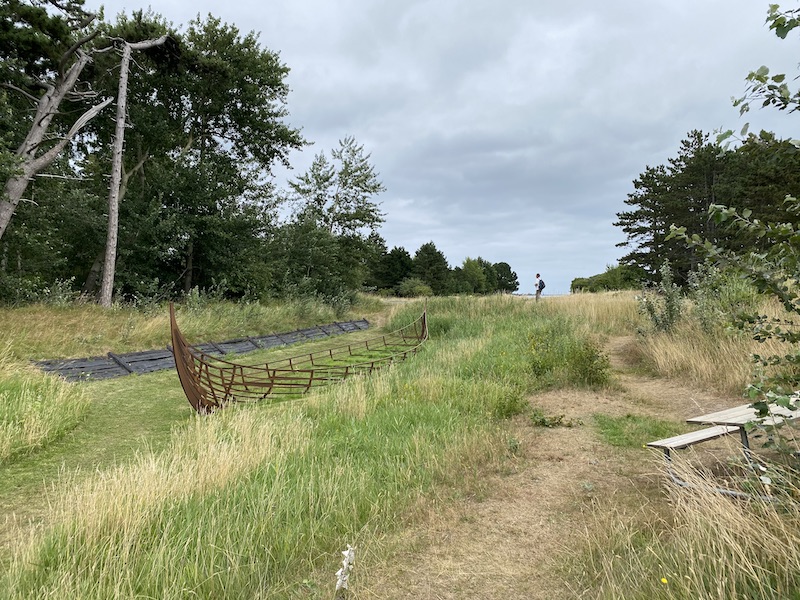 From here we continued towards the Lille Belt, which is the passage between Jutland (mainland Denmark) and the Island of Fyn. This passage took us through towns (Fredericia and Middelfart) and under bridges. Surprisingly, the area was full of dolphins and we managed to see 8 in one day! 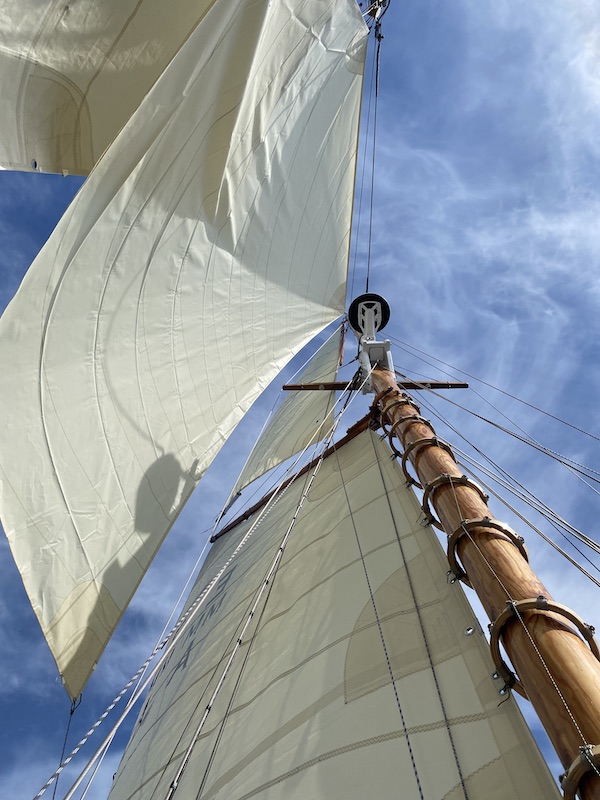 Testing the topsails and the “fisherman” sail. 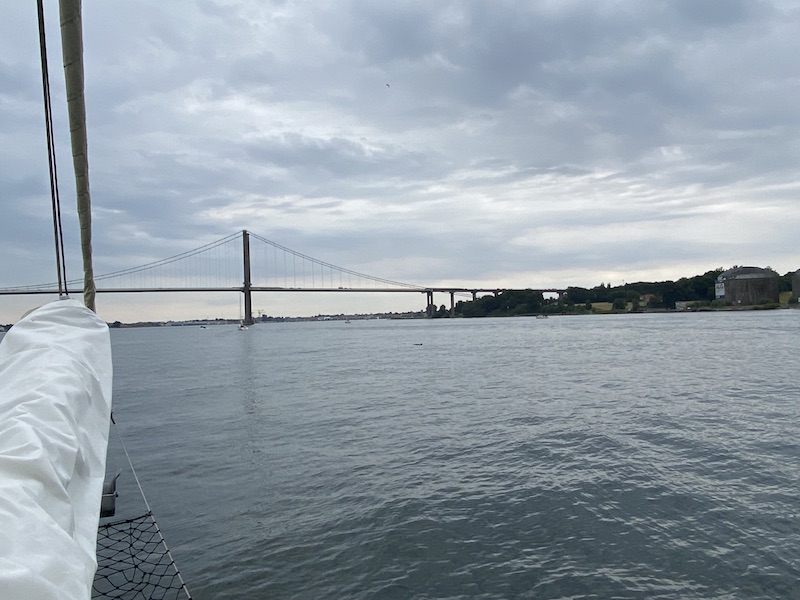 Dolphin sighting (one of many)

After passing Middelfart we headed into Gamborg Fjord and spent a very calm, quiet night. This is one of many places that I know we will return to. 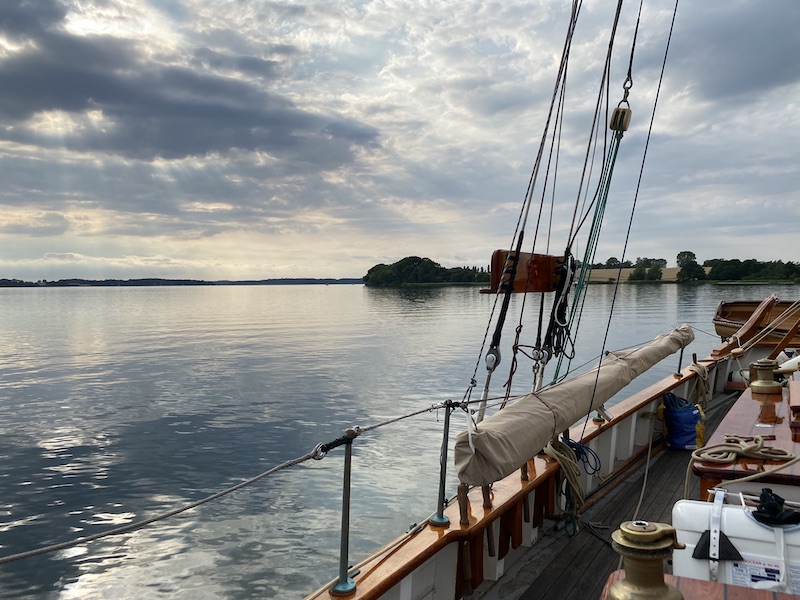 The peace & quiet (and privacy) one has at anchor outweighs the “comforts” of loud, busy harbors. 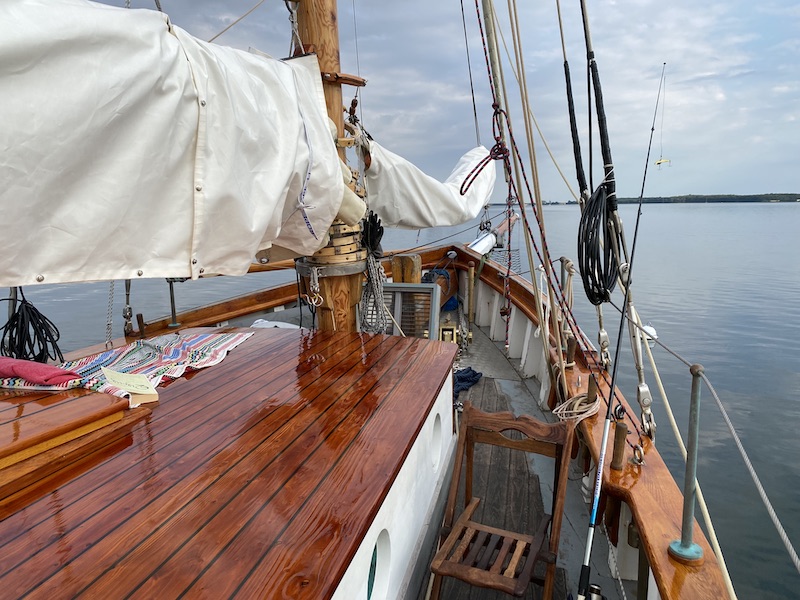 Fishing, swimming with the jellyfish, reading, napping. I am content.

And then we sailed to Helnaes bay for another night on the hook. There was quite some wind and we woke up facing in the other direction. But the anchor had stayed put. We definitely are going to build an anchor davit to make the hoisting more efficient (We hoist with an old-school wallas anchor winch, which aids the process but still involves a lot of pulling). 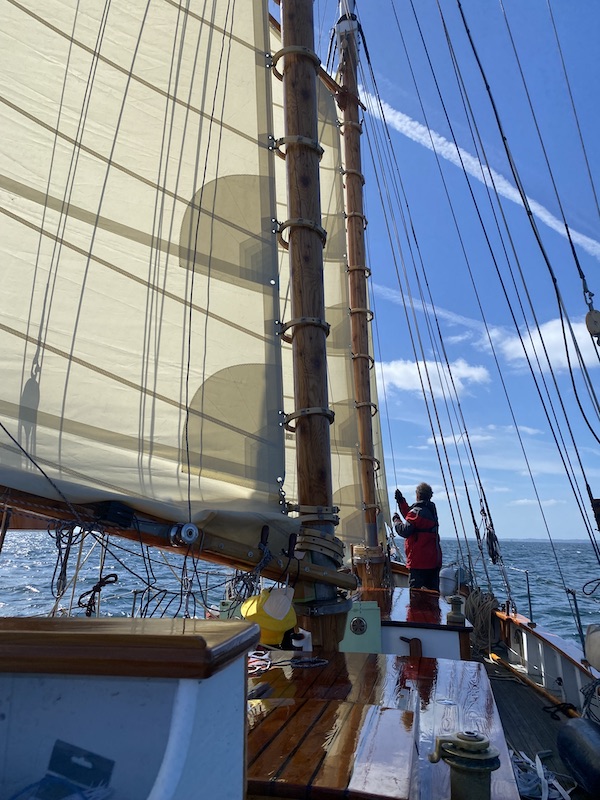 W is constantly observing his sails and adjusting the rig. 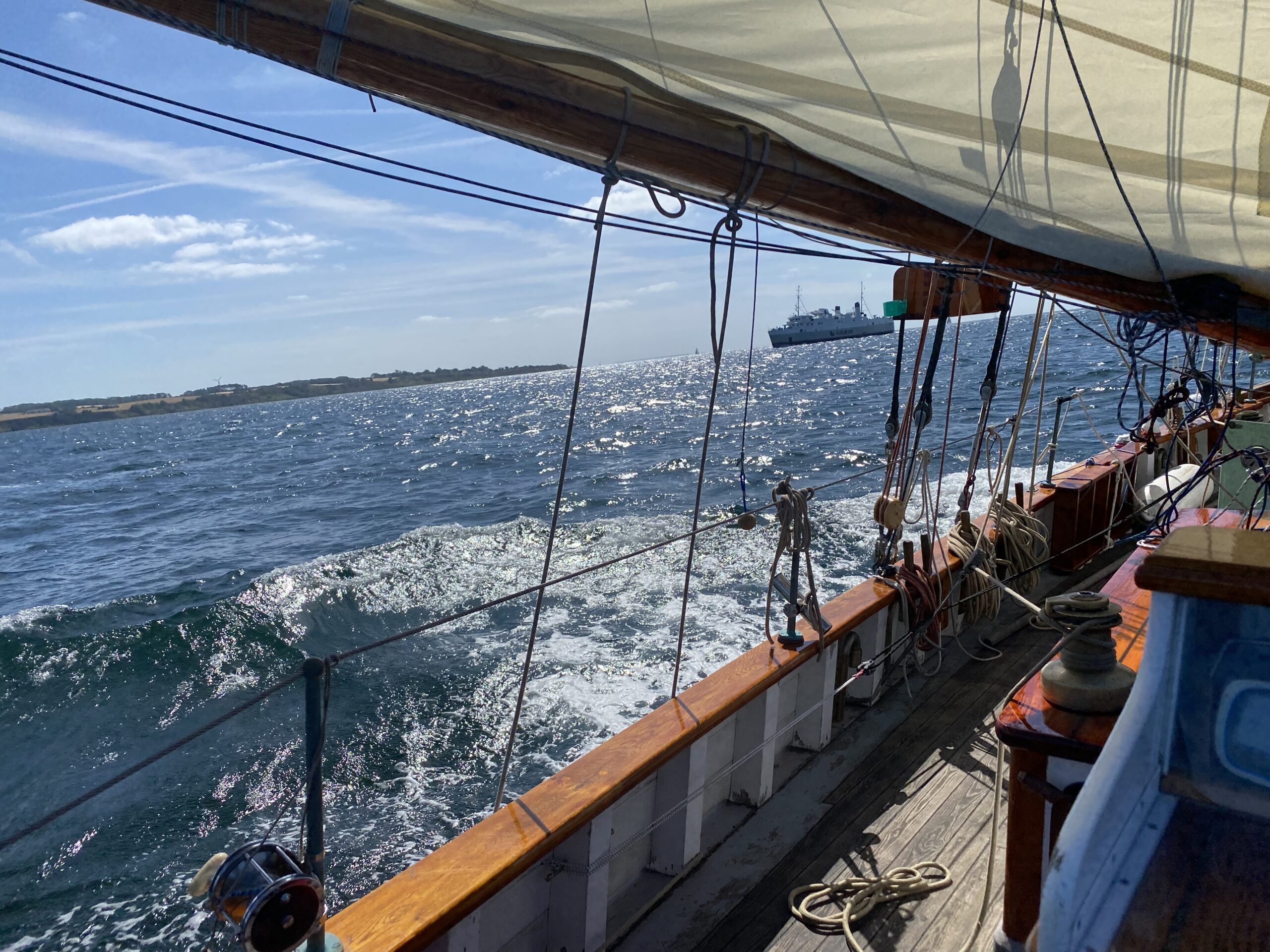 Leaving Helnaes Bay for our last stretch to Aero.

Our sail to Aero was windy, sunny, and challenging. We made it into the harbor and to the spot that (thankfully) had been kept clear for us. That’s Emma’s permanent spot and just a few minutes from home 🙂

What an adventure! I look forward to discovering more hidden anchorages and quiet harbors in the area. This trip taught us a lot about handling Emma (i.e. what NOT to do 😉 and pacing our travels. We were under time pressure, as I needed to get back to Switzerland to teach a seminar. We can’t wait until we’re out there with a more open schedule, so we can wait for good winds instead of motoring. After 3 weeks sailing, I felt like my arms had gotten very strong and I also was so accustomed to being outside all the time. Can’t wait for more ….. 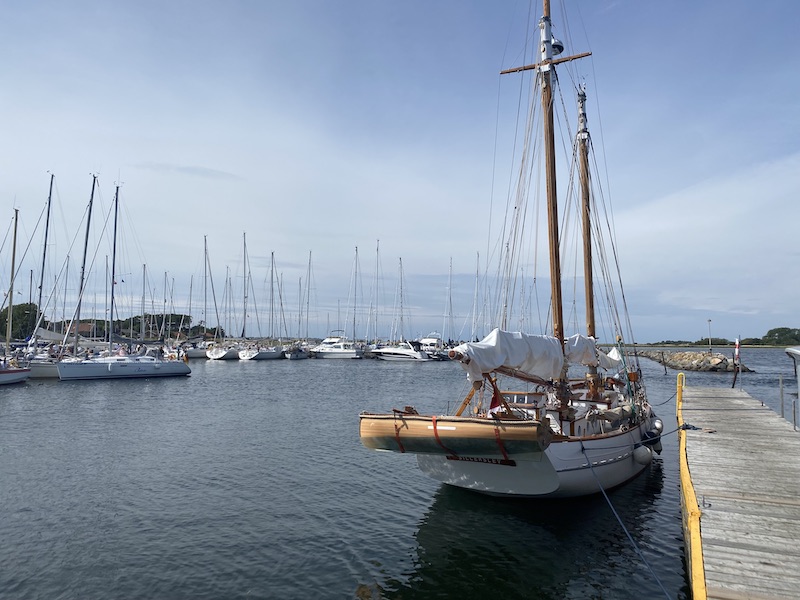 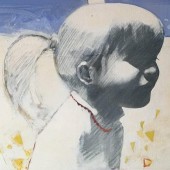 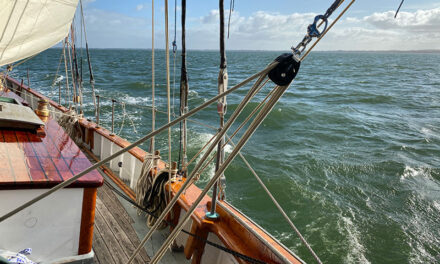 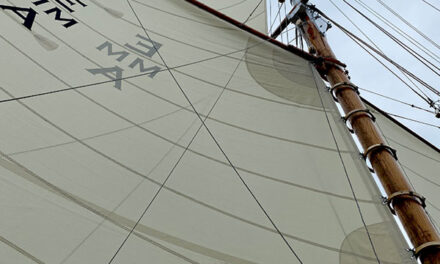 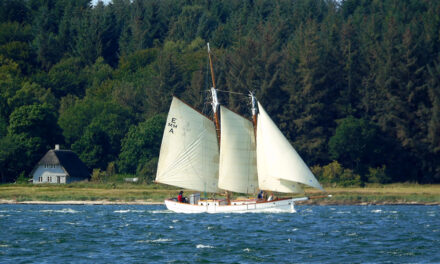 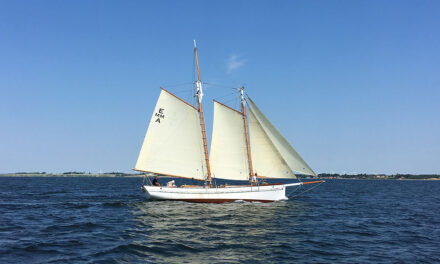 Getting ready to sail