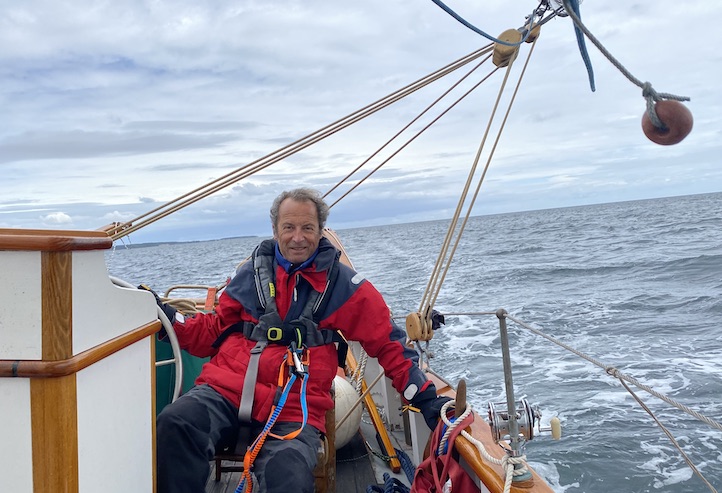 Walter’s first exposure to sailing dates back to preschool age. He spent vacation time with his godfather who had a Dragon class sailboat on the lake of Geneva. He was asked to take the tiller – presumably because it was rather calm. A plume of smoke rising straight up into the sky from a smokestack ashore indicated the course to be held.

A bit later in the early days of electronics development the family moved to Bangalore in India. Sailing was practiced on a nearby lake, the Hesseregatta, on Snipe dinghies. Every once in a while, young Walter was allowed to crew with his dad and race against some ambitious expats. His father was not really an expert sailor though so one of the memories of that time is getting saved by the regatta support team after their snipe had swamped in a head to head race to the next buoy. That was before self-bailing dinghies became the norm…

In his late teens, back in Switzerland, friends purchased two Fireball kits which were finished and outfitted together. That’s when regatta sailing entered the picture.

After graduating from school and getting bored with studying Walter took off with a friend and his wife who had little experience in sailing and needed a hand with their newly purchased boat. The small and quite old boat was hardly seaworthy enough for a trip in open waters. It came from a lake in northern Italy and did not like to have the gunwale in the water. Never the less they sailed down the Adriatic in a quest to make it to Tunisia. However, in Santa Maria di Leuca, at the boot heel of Italy, they had to give up that plan. Even after three attempts the Golf of Taranto would not let them get across.

Walter went to Gibraltar, hitched a ride on yet another small sailboat to the Canary Island. From there he crossed to the Caribbean on a big traditional wooden motor sailor and spent much time mending rotten cotton sails on the way. Three more Atlantic crossings and trips up and down the US eastern seaboard followed before meeting Stacy in the Virgin Islands. Windsurfing had become a passion by then. We met on Cinnamon Bay in St. John where Stacy had rented a cabin with her friend and Walter was hanging out on the beach waiting for wind…

Anyways, to cut a long story short, we moved to California, married, raised two kids in Switzerland, had a couple of boats on the Lake of Zurich, sailed a bunch of regattas and ended up buying EMMA and moving to Ærø in Denmark. If you have not done it yet, you may browse through the site and read about our trials and tribulations as they unfold.

Walter holds a professional Diploma for Naval Architecture, Marine Engineering, and Design of Small Craft issued by the Westlawn Institute of Marine Technology. He is an accomplished salt and freshwater sailor with an affinity to wooden boats and a sense for combining efficiency and performance in traditional sailboats. He has built, restored, fitted and sailed several small craft, especially inshore and offshore sailboats.

Stacy Müller (-Bühler) was once a professional graphic designer and is now a movement therapist specializing in tai chi and qigong. She loves water. She met Walter while chartering a sailboat in the US Virgin Islands in the 1980s and decided to move to the island of St. John to be with Walter and to learn to windsurf in a warm climate.

After moving back to California and then to Switzerland and becoming parents, Stacy and Walter decided to shift their watersport activities back from boards to boats and spent vacations bareboat chartering with friends and family in Greece (Cycladic Islands 1993), the Caribbean (BVI & USVI 1995), Corsica (2000), Greece again (Athens – Patras 2003), Greece yet again (Sporadic Islands 2005), Turkey (2006… had we known that it was so much nicer than Greece then we would have gone here earlier!), and Sweden (Stockholm archipelago 2014). All in all 15 weeks on board and who knows how many miles. But just a drop in the bucket compared to Walter’s experience.

Stacy got her lake sailor’s licence in 2003 and has been been sailing actively with Walter on their oldtimer Lacustre yacht SUI 97 “Porzana” (www.lacustre.ch) on the Lake of Zürich. (Stacy prefers relaxed distance-regattas and sunset sails to course regattas but when she does participate she usually works the foredeck.) 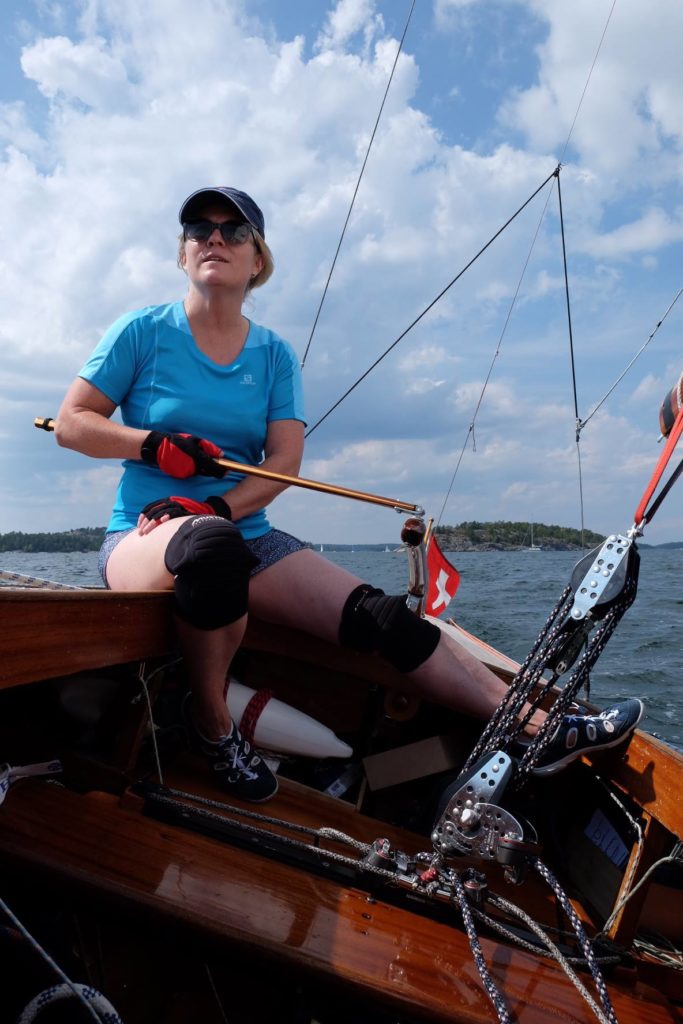 In Sweden with the Lacustre – Best sailing ever !! 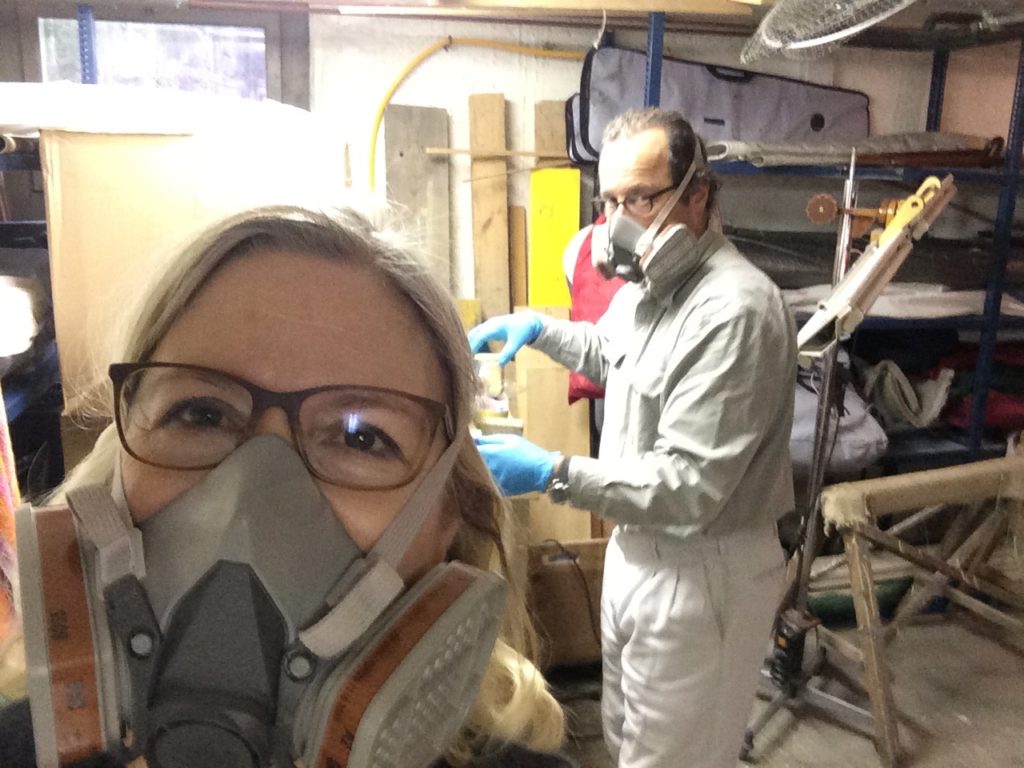 Team Müller with masks and gloves attending to brightwork. 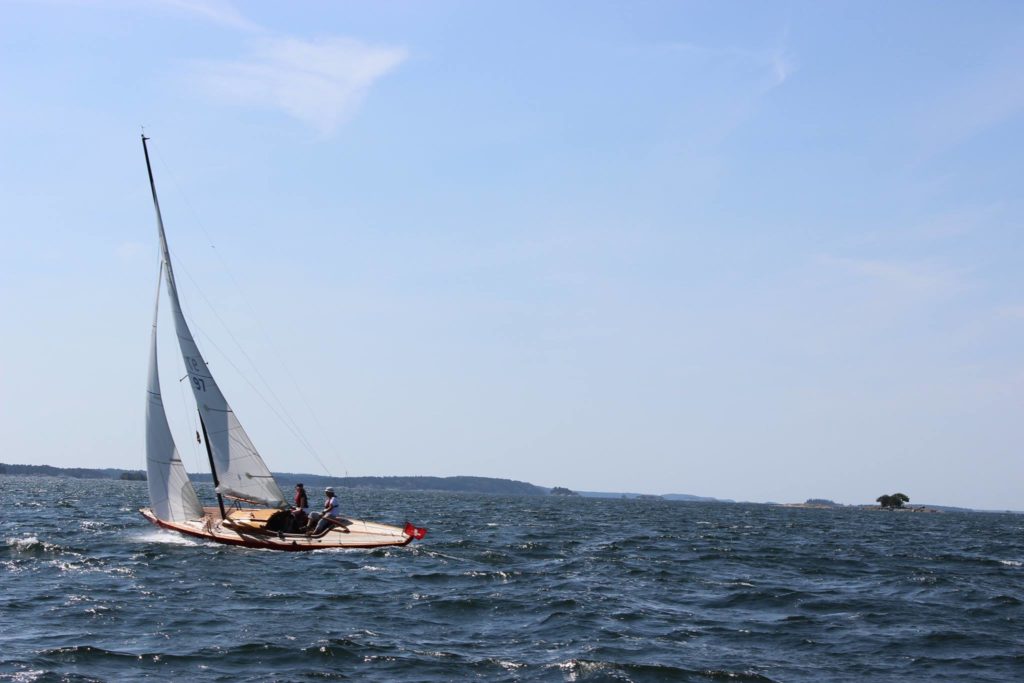 Müllers on Porzana in Sweden. 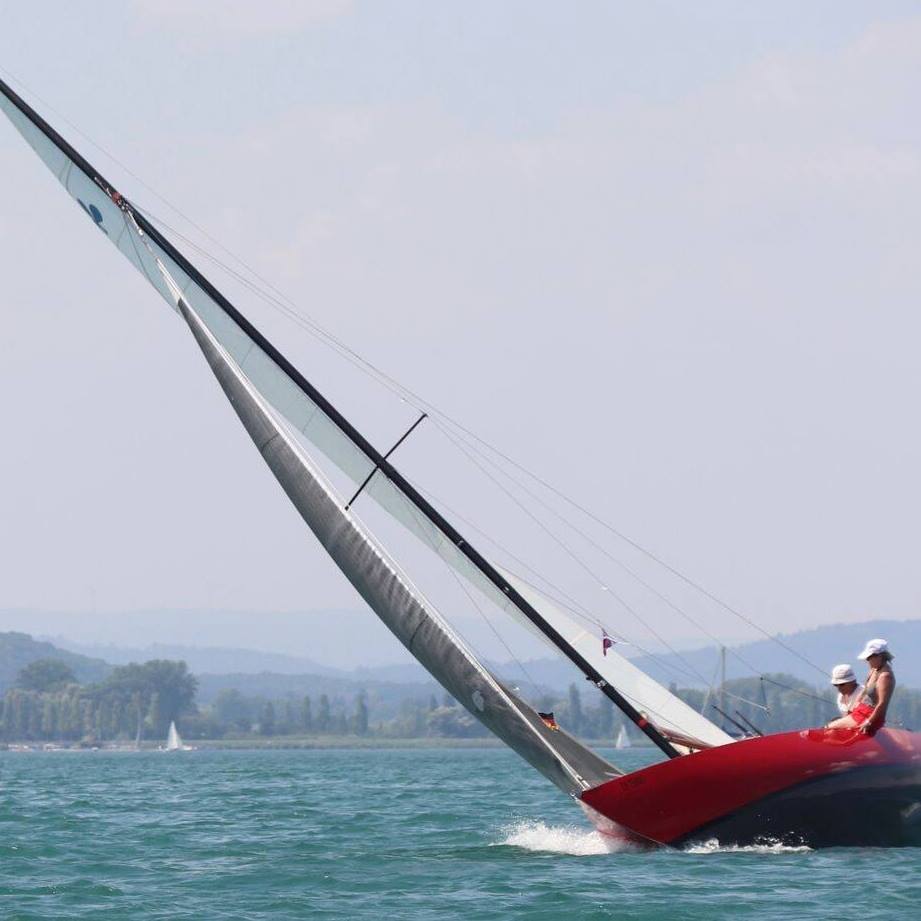 Müllers on Porzana on Lake Constance.